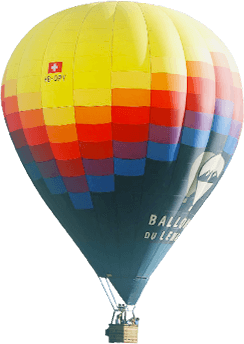 The Alps and Château-d’Oex region

Your curiosity will be satisfied in this colorful flight that runs through the landscapes of northwestern Switzerland, the famous ski resort of Gstaad, the charming town of Château-d’Oex known for its International Balloon Festival for over 40 years. From the Pays-d’Enhaut area, you will fly over the beautiful towns of this tourist region while descending on Gruyère. A climb to almost 3000m will offer us a view of the highest peaks around us.

Depending on the wind, you will fly over the Canton of Bern on the border between the French and German speaking part of the country, from the Bernese Alps to the Jura.

The canton is composed of six great regions all equally charming: the Bernese Oberland, Emmental, Upper Aargau or Bern-Mittelland, Seeland and the Bernese Jura. Swiss countryside, lakes, valleys and beautiful farms decorated with flowers, forests and meadows … all the colors of nature will amaze us!

All year round, weekends only

All wind directions. If we cannot leave from our usual sites, we can offer you several alternative departures.

Chosen according to the wind of the day

Do you already have a ticket?

Yes If you have a ticket, you can plan your flight

No Not yet a ticket?
You can discover our flights

Discover the Swiss vineyards, Alps and lakes in an open air 360-degree view basket! A moment of happiness and freedom to share with family or friends. It’s the perfect gift for any special occasion!

Enjoy the privacy of an exclusive hot air balloon flight for just you and your special guests. This package is ideal for anniversaries, special occasions, romantic escapes…

Come and feel the thrill of flying at night, at high altitude, or even crossing the Alps…

Take your teams and customers to new challenges! This flight is especially designed for your corporate events, team building, incentive, etc.